My post on Sunday about SEC vs. Big 10 football produced quite a stir. There are 165 comments and counting, and it even prompted posts by Richard Longworth and Crain’s Cleveland Business.

Not everyone was critical but the ones that were basically say that it’s ludicrous to say that football proves anything. I don’t think that it does. But I will make three points:

1. The differing fortunes of the two conference is yet another in an extremely long series of data points and episodes that demonstrate a shift in demographic, economic, and cultural vitality to the South.
2. Sports is one of the many areas in which Midwestern states have clung to traditional approaches, even though those approaches haven’t been producing results.
3. Demographic and economic changes have consequences. It’s not realistic to expect that the Midwest’s excellent institutions will necessarily be able to retain excellence when supported by hollowed out economies.

I’d like to throw up a couple of charts to illustrate the longer term trends at work. The first is a comparison of per capita personal income as a percent of the US average for Illinois vs. Georgia since 1950: 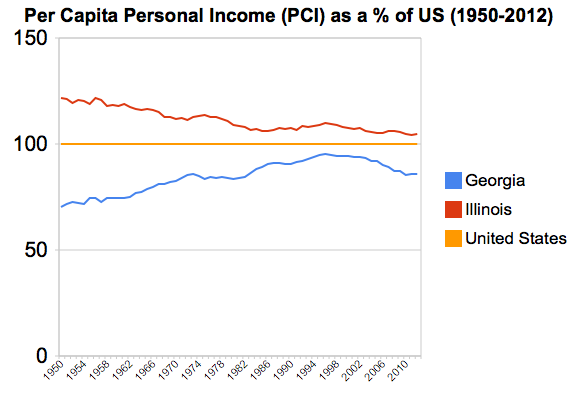 Here’s the same chart of Ohio vs. North Carolina: 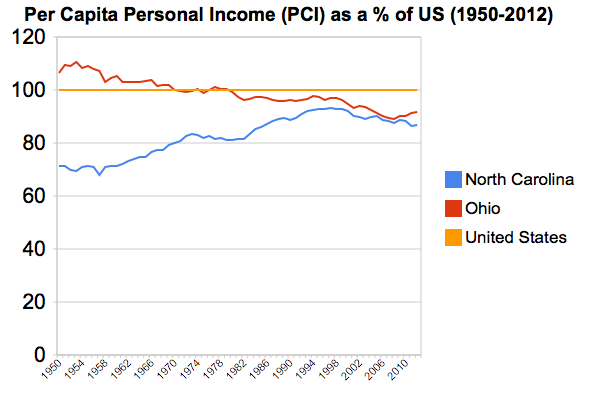 If I put up the population or job numbers, the same charts would show the South mutilating the Midwest. (Indiana, Georgia, and North Carolina were all about the same population in 1980, but the latter two have skyrocketed ahead since then for example). What’s more, the South’s major metros score better on diversity and attracting immigrants than the Midwest’s major metros as a general rule.

These charts show the convergence in incomes over time. The decline in relative income of the Midwest is possibly in part to increases elsewhere, not internal dynamics. But think about what the Midwest looked like in 1950, 60, or 70 vs the South, then think about it today and it’s night and day. The Midwest may still be endowed with better educational and cultural institutions than the South, but we can see where the trends are going. Keep in mind that those things are lagging indicators. Chicago didn’t get classy until after it got rich, for example.

Now we see that Southern income performance hasn’t been great since the mid to late 90s. This is a problem for them. As is their dependence on growth itself in their communities. I won’t claim that the South is trouble free or will necessarily thrive over the long haul. But they seem to have a clearer sense of identity, where they want to go, and what their deficiencies are than most Midwestern places.

Longworth seems to buy the decline theory but has a different explanation of the source, namely that Chicago has sucked the life out of other Midwestern states:

In the global economy, sheer size is a great big magnet, drawing in the resources and people from the surrounding region. We see this in the exploding cities of China, India and South America. We see it in Europe, where London booms while the rest of England slowly rots.

And we see it in the Midwest where, as the urbanologist Richard Florida has written, Chicago has simply sucked the life — the finance, the business services, the investment, especially the best young people — out of the rest of the Midwest.

To any young person in Nashville or Charlotte, the home town offers plenty of opportunities for work and a good life. To any young person stuck in post-industrial Cleveland or Detroit, it’s only logical to decamp to Chicago, rather than to stay home and try to build something in the wreckage of a vanished economy.

This seems to be a common view (see another example), even in the places that would be on the victim side of the equation. But I’ve never seen strong data that suggests this is actually the case. Are college grads and young people getting sucked out of the rest of the Midwest into Chicago?

Thanks to the Census Bureau, we now have a view, albeit limited, into this. The American Community Survey releases county to county migration patterns off of their five year surveys sliced by attribute. There seems to be some statistical noise in these, and for various reasons I can’t track state to metro migrations, but thanks to my Telestrian tool, I was able to aggregate this to at least get metro to metro migration. So here is a map of migration of adults with college degrees for the Chicago metro area from the 2007-2011 ACS: 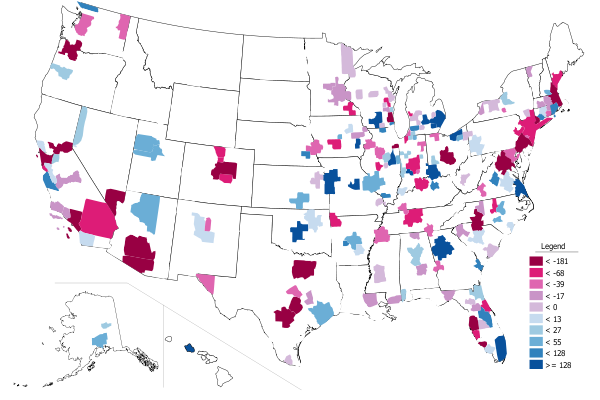 Net migration of adults 25+ with a bachelors degree or higher with the Chicago metropolitan area. Source: 2007-2011 ACS county to county migration data with aggregation and mapping by Telestrian
This looks like a mixed bag to me, not a hoover operation. What about the “young and restless”? Here’s a similar map of people aged 18-34: 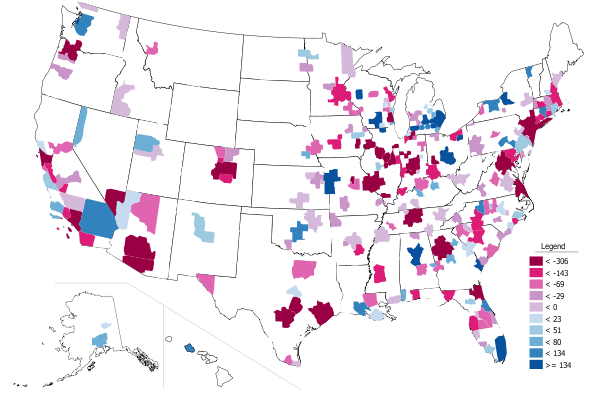 Net migration of 18-34yos with the Chicago metropolitan area. Source: 2006-2010 ACS county to county migration data with aggregation and mapping by Telestrian
This is an absolute blowout, with a massive amount of red on the map showing areas to which Chicago is actually losing young adults. Honestly, this only makes sense given the well known headline negative domestic migration numbers for Chicago.

I do find it interesting that there’s a strong draw from Michigan. Clearly Michigan has taken a decade plus long beating. There’s been strong net out-migration from Michigan to many other Midwestern cities during that time frame, and its the same in Cleveland, which also took an economic beating in the last decade. This is just an impression so I don’t want to overstate, but it seems to me that a disproportionate number of the stories about brain drain to Chicago give examples from Michigan. Longworth uses the examples of Detroit and Cleveland. These would appear to be the places where the argument has been truly legitimate, but that doesn’t mean you can extrapolate generally from there.

What’s more, even if a young person with a college degree does move to Chicago from somewhere else, will they stay there long term? They may circulate out back to where they came from or somewhere else after absorbing skills and experience. It’s the same with New York, DC, SF, etc. I’ve said these places should be viewed as human capital refineries, much like universities. That’s not a bad thing at all. In fact, it’s a big plus for everybody all around. Chicago is doing fine there. But it’s a more complex talent dynamic than is generally presented, a presentation that does not seem to be backed up by the data in any case.